Updated 9:58am November 7, 2022, to correct a misstatement about District 5 candidate Aaron Webman’s total contributions. That error did not affect the accuracy of the spreadsheet.

Former state senator and current mayoral candidate Kirk Watson managed to spend more than $830,000 in the just three weeks. He’s trying to win back the office he abandoned in 2001, midway through a second term. And yet he still had $113,000 in cash on hand.

Watson, who’s been a high-profile political player since first elected mayor in 1997, and a veteran of the Texas Senate as well, demonstrated fundraising prowess that put him in a class by himself. He raised nearly $1.4 million through October 31st.

The biggest single recipient of his recent spending was Berlin Rosen Ltd. of New York City for producing and placing television and digital advertising. Payments to that firm totaled nearly $743,000.

If that wasn’t enough to bury the competition, Watson also reported support from six political action committees: Austinites for Equity, Capital Area Progressive Democrats, TREPAC, Charter Schools Now, Stand Together Austin, and Austin Board of Realtors. Spending by supporting PACs must be noted in a candidate’s campaign finance reports but is made without a candidate’s knowledge or consent.

The other major Democrat running for mayor, Celia Israel, raised more than $400,000 but even that hefty sum pales in comparison to Watson’s take.

Israel spent a bit more than $89,000 in the last reporting period. Watson outspent her by more than 10 to 1.

Israel got no help from friends in terms of supporting political action committees.

Jennifer Virden, the GOP candidate in the mayor’s race, has raised a grand total of $183,000 in contributions for her campaign, which she launched a year before election day.

She spent a bit more than $78,000 in the latest reporting period.

Despite having loaned her campaign $300,000 when she kicked off her campaign in 2021, she was still sitting on more than $252,000 in the latest report. In reading the financial tea leaves, it seems that she has figured out she’s not going to win this thing and may be saving it to repay herself for most of that loan. Either that or she’s holding onto it in case she gets into a runoff.

Virden has not reported any support from political action committees.

All together these three mayoral candidates have raised more than $1.9 million and spent $1.8 million and change.

The other three people on the mayoral ballot—Anthony Bradshaw, Phil Compero Brual, and Gary S. Spellman—have yet again ignored the requirement to file campaign finance reports. They each paid a $500 filing fee and have gotten attention but competitive candidates they are not.

Linda Guerrero has pulled in nearly $72,000 and she is getting outside help from a number of PACs, including Central Austin Democrats, Austin Environmental Democrats, and Washington, DC-based IBEW (International Brotherhood of Electrical Workers). No other District 9 candidate reported PAC supporters.

It’s interesting to note that Olson, who drew some negative press coverage for taking a $50,000 loan from her sister, hasn’t spent any of it.

Ryan Joseph Alter (no relation to District 10 Council Member Alison Alter) has raised more than $80,000 but logged expenses of more than $112,000 because he reported an unpaid obligation of more than $27,000 to his political consultant, Y-Strategy. Alter is also getting support from the Real Estate Council of Austin Inc. Advancing Democracy PAC.

Ken Craig, who’s vying to succeed his former boss Ann Kitchen as the District 5 representative, gathered nearly $74,000 in donations and spent more than $63,000. He’s also getting PAC support from Austinites for Equity.

Brian Anderson was dead last in District 5 fundraising with $4,400.

Velasquez way out front in District 3

Jose Velasquez is the only candidate to top $100,000 in this race, with more than $104,000. No other candidate came close. He spent more than $80,000. As if that wasn’t enough, his campaign is also supported by the Austinites for Equity PAC.

Incumbents are killing it

Natasha Harper-Madison in District 1 and Paige Ellis in District 8 are the only incumbents seeking reelection this year.

The three candidates running against Harper-Madison raised a combined total of barely $21,000 and have spent $28,000.

Kimberly P. Hawkins and Antonio D. Ross are on the ballot in District 8, but have filed no campaign finance reports. They, too, paid $500 filing fees but are making no effort to win the office.

Trust indicators: Ken Martin started tracking and reporting on campaign finance reports for Austin’s mayoral and city council candidates in July 1995, when he launched the In Fact newsletter covering city hall and local politics. The Austin Chronicle bestowed a “Best of Austin” award on the newsletter back then, saying that he sliced and diced campaign finance reports like a ginsu master.

Related documents: The campaign finance reports upon which this report is based may be accessed on the Austin City Clerk’s website. 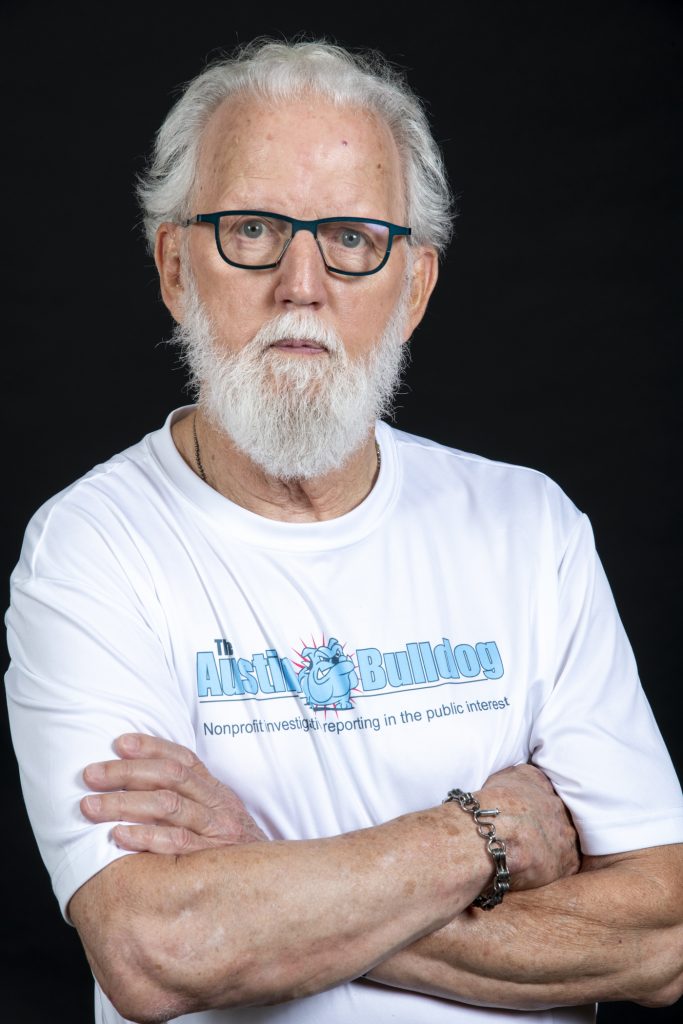 Editor Ken Martin
Ken Martin, founder, editor and publisher: Ken got interested in journalism while a career officer in the U.S. Marine Corps. After serving more than 20 years on active duty, including a tour in Vietnam, he completed his career as a major and moved to Austin in 1978 to earn a humanities degree with a minor in journalism at the University of Texas. Today Ken may be the only living journalist who has worked full-time for publications located in the three major counties of the Austin metropolitan area: Travis, Williamson and Hays. He has been a reporter and editor in the tri-county area since 1981, including associate editor of Third Coast magazine (1981-84), managing editor and janitor of the Dripping Springs Dispatch (1984-85), and county and political editor of the Williamson County Sun (1986-89). His aggressive reporting twice garnered first-place national awards for investigative reporting. Both of those projects resulted in successful criminal prosecutions. In launching The Austin Bulldog, Ken returned to his roots in investigative reporting, covering both the public and private sectors. Ken was an investigative reporter for the Austin Business Journal 1989-1990 and served as editor 1990-1994, a period in which the newspaper won numerous awards for journalistic excellence. In 1995, he started the In Fact weekly newsletter covering Austin City Hall and local politics. Beginning in 1998, while still publishing In Fact, he also owned and edited Texas Public Utility News for 13 months, producing a twice-monthly newsletter covering the Texas Public Utility Commission. In 1999, Ken began publishing the In Fact newsletter five days a week, making it In Fact Daily, Austin's first online newsletter. Meanwhile, in 1997, Rebecca Melançon and Ken founded The Good Life magazine, which he edited for more than 11 years. The magazine published numerous special reports, including five in 2008 alone, before ceasing publication in January 2009 due to the economy.
Share
Facebook
Twitter
Share
Facebook
Twitter